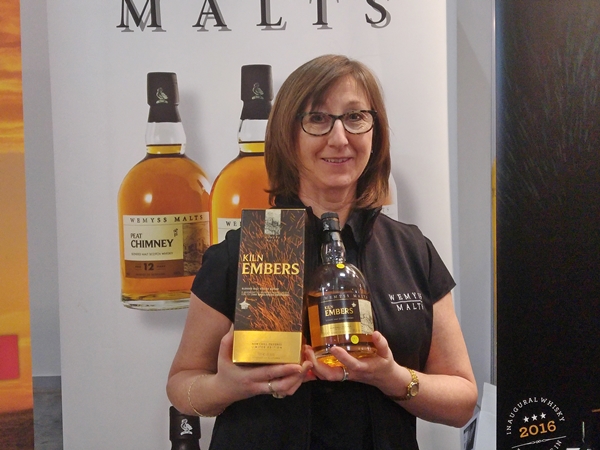 Jacqueline, I would like to introduce you to my readers and tell them who you are.
That’s a nice idea, thank you. I’m here at the Hanse Spirit for the first time. Chris Rickert, who runs the show, has been to visit us a couple of times in Scotland. A great fun guy and the head of the Hanse Spirit. I knew it is a good show to make people interested in spirit in general as our portfolio has gin as well as whisky. And to support Alba, our partners here in Germany, who are just amazing people, working so hard for us. And to give them a little bit of assistance on a busy show I am here.

Is it the first time you are here in Germany?
No, this is probably the 5th or 6th time. My very first visit to Germany was with another company and I met Didi and Corrie there. It was a private club tasting in Bremen. So I’ve known them for quite a while. Over the years we met up several times.

How long have you been working for Wemyss?
Nine years in the whisky industry and three years with Wemyss now.

And what is your job in this company – except of visiting shows like the Hanse Spirit…
It’s quite a busy role and mixed you know. See, there’s a chairman, William Wemyss, the owner of the company. There’s his sister Isabella, owner as well and working in logistics and buying casks etc.….. We have our logistics manager Gordon who looks after our daily or monthly or annual bottlings and the daily ordering – the logistic sides of it. Then we have a shared accounts team and then there’s two people in marketing, also dealing with Kingsbarns. There are two of us in sales, Ginny and I. We cover half of the world each. You see, we are small teams and you have to be involved with everything, not just ambassadorial works. The sales work, everything it takes.

How did you come to enter the whisky business? Was it because of a corresponding familiar backround or because of a personal passion?
I lived away from Scotland for a long time. Probably 18 years. And everywhere you go if you have a Scottish accent people want you to know everything about whisky. So I started to think: “I’ll better learn about it”. I wasn’t drinking anything sophisticated for a long time. But I came back to Scotland to live and at that point I wanted to be like an ambassador for Scotland. I knew overseas people had a real passion for the subject. I approached another independent bottler. He said “Yes, we’ll take you on and give you a chance”. So that’s how it happened.
The very first malt I fell in love with was Mortlach. I’m delighted now that the Wemyss portfolio circles around the signature malts which are there in The Hive, Spice King and Peat Chimney. They use their aroma, the flavour profile to create the brand. And that’s exactly what happened to me when I smelled the Mortlach. Somebody told me “You are going to get meaty notes here, rich, rich and heavy fruits and I said “Bingo, yes, I understand, I got it, I love it”. So that encouraged me to explore more and more and more to find the connection with the whisky.

Is it still your favourite type of whisky? Or has your preference changed?
There’s always one or two you want to get back to. But if you are privileged as we are to try single cask bottlings, you’ll never find that bottle again. So your favourite does keep changing. See, your palate changes as your mature and it depends very much on who you are. I would say I’m not a big Islay fan and I went to Islay last year. Sat there in the warehouse and – oh my goodness – it just came to life. And for that moment in time I didn’t want to try anything else.

Which warehouse was it?
It was Bruichladdich. So I think that’s the magic, you know. It’s not just about the whisky. It’s the people you are with. The moment, the occasion, the blue sky, the grey sky, whatever it is it captures that moment of time. And that’s the magic, it stays with you. Regarding whisky drinkers in Germany and Scotland: Is there a difference you can see? Difference in preferences or questions they ask you when you are on shows?
Back in Scotland people are drinking a lot of non-whisky lights. When they meet and discover whisky for the first time there is not so much knowledge. Here generally people you meet have a wide, wide knowledge of whisky. They tried so much. Maybe three or four years ago I would have said all you hear is “peat, peat, peat”. This year it’s “sherry, sherry, sherry”. So, times are changing – which is great!
You have a bigger population so these events attract a much bigger number of people with that fascination and deep, deep knowledge. Back in Scotland, there’s only a few, there’s a crowd that would recognize at each event. Not the same passion and knowledge, but the vast majority are keen to learn, they want to be educated. We are not like France where everybody knows about wine from the day they are born; Scotland’s not like that. We have a long way to go, a lot of education to do.

A topical theme that’s discussed in Germany with much passion is whisky without age statement. What do you think about those whiskies and the tendency of the whisky industry to produce more and more non age statement whiskies?
I think personally you have to use your palate, your nose, your eyes. So I don’t think anything should be written off. You can create great whiskies without age statement. But the marketing that had been for the last forty, fifty years has pushed the statement so hard that we can’t help thinking that way. So as soon as you see a listing with 30 years you want to try. But it doesn’t mean it’s for everybody and unless it’s a damn good cask it’s not automatically a great whisky. It’s all about sampling, trying and knowing. It lies within the bottle. I ask people to do and not to shut down as soon a non-age statement.
The same is with blends: We work very much with blending malts and it is the same thing. If you are focused and single minded about single malt or single cask, then you have chosen a direction and I think you have to keep your mind much more open. To me the skill and distilling is there, it’s fantastic. But the skill in blending is so underrated. Distilling is the craft, blending is the art is my motto. So the non-age statement has got to happen. The industry is dictating it. There are not enough matured casks out there. People don’t want to pay more for the things that are rarer so they have to keep their mind open to try the younger things.

But one of the most criticised aspects is the price of non-age statement whisky. It is often very expensive. People say: Okay, it’s not that old, not kept that long in the warehouse for maturation, so why is it so expensive?
The other way to look about it is “Why is the 21 year old so cheap?” Because if you walk around the show today and look on the price of those gins: They were made yesterday, they were bottled today. And they are on the shelf and they are selling it 30 Euro! And people have a problem paying 35 Euro, 40 Euro or 60 for something as.. well, … if you think about how intimate these bottlings are, how mature. Money couldn’t pay for it.
I think people’s expectations have been met for so, so long it is a bit of a shock and a big talking point right now.
If you look at the price of a bottle of whisky versus a bottle of champagne I always used to say. Now it’s compared to the gin. But if you look at the price of a bottle of champagne: Is there more skill in that than there is in a bottle of whisky? You open it and soon as it is uncorked you have to drink it at that day and a bottle of whisky can be there for the next two or three years.
So I think whisky – I shouldn’t say it’s too cheap, but I think it’s perhaps undervalued…. And there for the new releases can appear to be more expensive but are they really? Versus something else you might be drinking?

And what is it that you like to be drinking? Now, today? Is there a favourite whisky at your stand that you would recommend me to taste?
To celebrate 10 years of Wemyss, a massive milestone for a small company, we released Kiln Ember.
It is creative, balanced. I also feel our whiskies are great sharing whiskies, there’s no extremes. It will keep most people at the table happy. And I would love to share it with you now! Thanks to Jacqueline for the little interview and thanks for the following little tasting of the Kiln Ember, a peated malt that really is a very accomplished creation. It presents distinctly more smokiness than the Peat Chimney but also with a deep aromatic fruitiness. 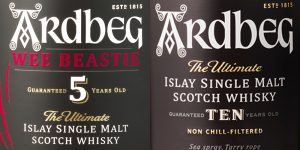 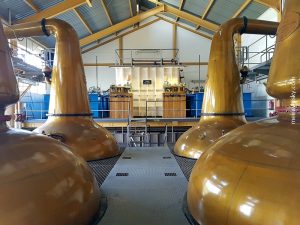 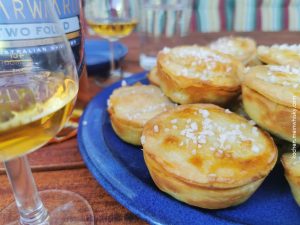